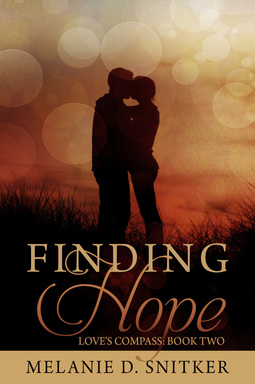 Cancer. That one word has rocked Lexi Chandler's life to the core. Her focus has always been to help others. She loves being a nurse and enjoys spending time with her family. Things had been going according to plan. Now she’s struggling to pick up the pieces and make sense of the changes in her life.

Lance Davenport has cared for Lexi since they were kids. Between their age difference and bad timing, he's turned burying his feelings into an art. Now, watching Lexi battle with cancer has made him realize just how much he's missed. He doesn't know what their future holds, but he's determined to not waste another minute.

The people closest to Lexi pull together as she tries to navigate her way down a path none of them ever dreamed she’d have to follow.

Amazon | Barnes and Noble
Meet the Characters
Who is Lexi Chandler?
Alexis Chandler is one of the main characters in my newest book, Finding Hope, which will be available July 1st. If you've read Finding Peace, you'll remember she's Tuck's older sister and a successful registered nurse at the Kitner Memorial Hospital emergency room.

In general, Lexi's felt in control of her life. She enjoys her job, loves her family, and things are predictable. Until a single word, "Cancer," changes everything.

Three Things Lexi Enjoys:
#1 - Lexi has always appreciated her family and looks forward to spending time with them. She's especially close to her younger brother, Tuck.
#2 - While she enjoys most aspects of her job working at the ER, her favorite part is helping the children who come in. She has a knack for making them relax and even smile, despite the illnesses that bring them there.
#3 - Her favorite food is Mexican food - specifically tacos. She's never met a taco she didn't like.

Three Things Lexi Dislikes:
#1 - A particular attending physician at the ER where she works who's determined to date her, and every other woman with a pulse.
#2 - That she and her sister, Serenity, have grown so far apart. It all started before Serenity's son, Gideon, was born. So far, there's been nothing Lexi's been able to do to bridge the gap between them.
#3 - Many of the changes that a recent doctor's appointment has brought to her life. She hates feeling out of control!
Who is Lance Davenport?
We are introduced to Lance in Finding Peace. He's been best friends with Tuck Chandler since they were young. They grew up together, went through the police academy together, and served the town of Kitner as partners on the police force for years.

In my new book, Finding Hope, we discover that life has changed quickly. After his dad suffers a stroke, Lance chooses to leave his career and keep his dad's carpentry business going.

Now, he's worried about the woman he's always had feelings for but managed to keep at arm's length. Lexi's facing cancer and the last thing he wants to do is waste more time.

Three of Lance's Favorite Things:
#1 - Spending time with Lexi and doing what he can to bring a smile to her face.
#2 - Ribbing his best friend, Tuck, every chance he gets.
#3 - Despite the difficulties he's had getting used to a change in profession, he enjoys working with wood and crafting things with his own two hands.

Three Things Lance Dislikes:
#1 - Watching his friends go through something and feeling helpless.
#2 - Seeing his dad struggle with the loss of his ability to do the work he's always enjoyed after suffering a stroke.
#3 - The years he's ignored how he felt about Lexi.

When I wrote Finding Peace, I knew that I wanted to see more about Lance in the future. I hope enjoy getting to know him, too!
Finding Hope: Book Excerpt
Lance Davenport leaned his chair back on two legs. He surveyed the hospital cafeteria, keeping his eyes on the double doors.

He wasn’t sure of Lexi’s schedule, but he knew she was working today. Since the cafeteria always served Mexican food on Wednesdays, she’d show up for lunch sooner or later. The woman loved her tacos.

Another five minutes passed before she appeared. She strode into the room, her purple scrubs matching several others in the room. She pushed some of her short hair behind a delicate ear. Her hair was nearly black — it’d been like that since they were kids. Dark as molasses.

Lexi picked up a tray and advanced towards the taco bar. By the time she’d gotten to the register, he was waiting, holding a twenty out to the cashier.

Lexi’s brown eyes swung to his. “Lance, you’re about the last person I expected to see here.” She nodded towards his hand holding the change. “Thank you.”

Lance followed her to a table and took the chair opposite her. “Not a problem.”

He watched her take a bite of refried beans.  “Can’t a friend come by and say hello?”

She raised an eyebrow at him.

He chuckled. They may have known each other since he was in the third grade, but it was Tuck, her younger brother, who’d been Lance’s best friend. In fact, Tuck was like a brother to him. That alone had saved Lance’s sanity more times than he could count while living in a household with four sisters.

Lexi was two years older than Lance. As kids, he’d admired her. She had a heart for helping others and exuded confidence in everything she did. Throw in her ready smile, long arms, and the graceful way she moved, it was no wonder every boy in school had had a crush on her.

Lance had been no exception.

The woman had only gotten prettier over the years. Long, dark lashes framed eyes that had a knack for recognizing the needs of people around her. But it was her smile that had the power to light up a room.

“Okay, you got me. I came with a reason. Do I need to bring anything to Tuck and Laurie’s welcome home party?”

His best friend had gotten married the weekend before. The new couple were away on their honeymoon. A week at a ranch in the mountains. It was not a typical honeymoon destination, but it fit both of them well.

The Chandler family had a welcome home party planned for them Sunday evening and Lance was invited. He attended a lot of the family gatherings. Normally, he didn’t think twice about them. He was out of his element on this one, though. This was his first friend to have gotten married, and he wasn’t sure what to expect.

“Don’t worry. It’ll be a simple pizza party. No gifts or anything special. Bring sodas if you want to.”

“I can do that.” He thought about how Lexi always chose tea over carbonated drinks. “I’ll bring a jug of iced tea, too.”

Her dark brown eyes sparkled as she smiled. “I appreciate that. Did you already eat?”

Lance’s eyes followed hers to the empty table space in front of him. “Yeah, earlier. I didn’t want to miss you.”

Her fork stalled on its way to her mouth. “How long were you waiting?”

“It doesn’t matter. I’ll be there right at five. Can’t wait to see them. It feels like forever.”

“It sure does. I imagine even more so for you after the last couple of months. How’s your father doing?”

Lance’s thoughts drifted to Peter Davenport. A strong man who had done carpentry work all of his life, Peter had spent many hours showing Lance how to build things. After three generations, there were a lot of memories attached to his dad’s workshop.

While Peter always supported Lance’s decision to be a police officer, there had been some disappointment when he didn’t take over the family business.

And then, in moments, everything changed. His mom, Vera, had called. His dad had had a stroke.

He survived, but the weakness on one side of his body had rendered him unable to work.

Lance’s world changed that day, too. He wasn’t about to let the family business fade to a memory.

A week after his father’s stroke, Lance gave his resignation at the police department. Two weeks later, he became the new owner of Davenport Carpentry.

“Dad’s okay. Therapy is helping him a lot. He’s frustrated. He’s never been one to sit around and do nothing. It’s driving us all crazy.”

“I’ll bet. He’s lucky he has his family to support him. How’s the change to carpenter working for you?”

Lance shrugged. “I always enjoyed the work, but figured I could make more of a difference as a cop. I’m adjusting. We all are.”

Lexi tossed her napkin on the table and chuckled. “Tuck is adapting, too. The stories he tells us about his new partner. I think he misses you daily.”

His deep voice blended with her feminine one as they laughed together. “He may be afraid to tell me too much so I don’t feel guilted into going back.”

“You might be right.” With a glance at the clock, she stood. “I need to get back.”

Lance followed suit and took her tray for her. “Busy day?”

“It usually is in the ER. It’s not be-held-at-knife-point busy, but it keeps me hopping.”

He returned her bright smile as his mind raced back six months. He and Tuck were working on a case involving the woman who was now Tuck’s new bride. Laurie had been stalked by a man searching for information she’d photographed. He stabbed her, but Laurie got a shot off. Later, the man ended up at the ER needing stitches and pain medication. The man found out Lexi had called it in and held her hostage with a knife.

It’d taken every ounce of strength Lance possessed to watch Tuck go through those doors and try to talk the man down while he waited outside.

Thank God the siblings had subdued the guy before he injured Lexi.

Lance called out to her as she started to walk away. “Don’t work too hard. I’ll see you on Sunday.”

She looked over her shoulder, that dark hair caressing her jawline. “Sounds good. Thanks again for lunch.”

He watched her leave, admiring the way she carried herself. Lexi had always appeared certain of who she was and where she was going. It was one of the many things that had drawn Lance to her when they were in high school.

Tuck had known about his infatuation with Lexi, but few others did. Lance said nothing about it at the time because he knew she was leaving for college while he still had two years of high school left to complete. A part of him always regretted not putting himself out there and seeing what would have happened.

That was a long time ago and they were in very different places now.
Read more about Finding Hope:
Crystal Walton - Release Information and Book Review